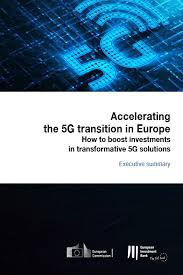 The European Investment Bank (EIB) has published the study “Accelerating the 5G transition in Europe“, in which discusses why the “fifth generation” of telecommunication systems — or 5G — is integral to digitalisation efforts, and how its roll-out will be one of the most critical building blocks of the European digital economy and society in the next decade.

The EIB points at public safety as one of the verticals expected to drive 5G based applications: “Public-safety stakeholders are expected to contribute significantly to the conversation that drives the 5G revolution, aiming to ensure that it meets their needs. Assured, dedicated and efficient cellular connectivity is required for public-safety and mission-critical applications, so as to enable the stakeholders to perform their crucial tasks. Cellular networks will need to be able to function in harsh environments and weather, transmit seamlessly from body cameras, enable warning broadcasts, provide continuous connectivity for drones, and maintain individual privacy.”

In the study, the EIB further examines the transformative properties of this technology and explore how to ensure that Europe remains a relevant, competitive and strategically autonomous player on the global scene.

A successful end of 2019 for BroadWay

We are now reaching the end of a successful year for BroadWay. The signature of…

BroadWay Kick-Off on May 1st

BroadWay officially started on May 1st 2018! We look forward to a fruitful cooperation  to shape…